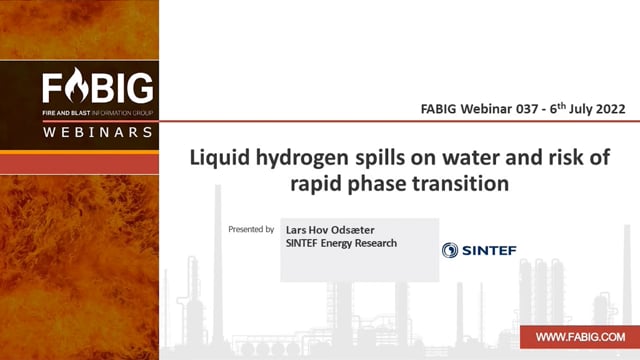 Hydrogen is a potential zero-emission energy carrier that can contribute to reduced emissions in the transport and energy sectors. Liquid hydrogen (LH2) has much higher volumetric energy density than compressed gaseous hydrogen. This is beneficial for large-scale storage and transport and for heavy-duty vehicles. LH2 is comparable to LNG, which has been applied as fuel for decades and whose behaviour and safety precautions are well known. When spilled onto water, LNG is known to sometimes, seemingly at random, undergo a localized explosive vaporization known as rapid phase transition (RPT). Such RPT events have the potential to have devastating consequences such as structural damage and cascading containment failures.

In the Norwegian research project SH2IFT (Safe Hydrogen Fuel Handling and Use for Efficient Implementation), we have investigated whether RPT is also an issue for LH2 spills. Both large-scale release experiments and thermodynamical modelling has been conducted. The models are based on established theory from LNG research and can estimate both triggering and potential consequences.

In this webinar presentation, the theory of RPT is described, and the main results and findings from the modelling work and experiments is presented.