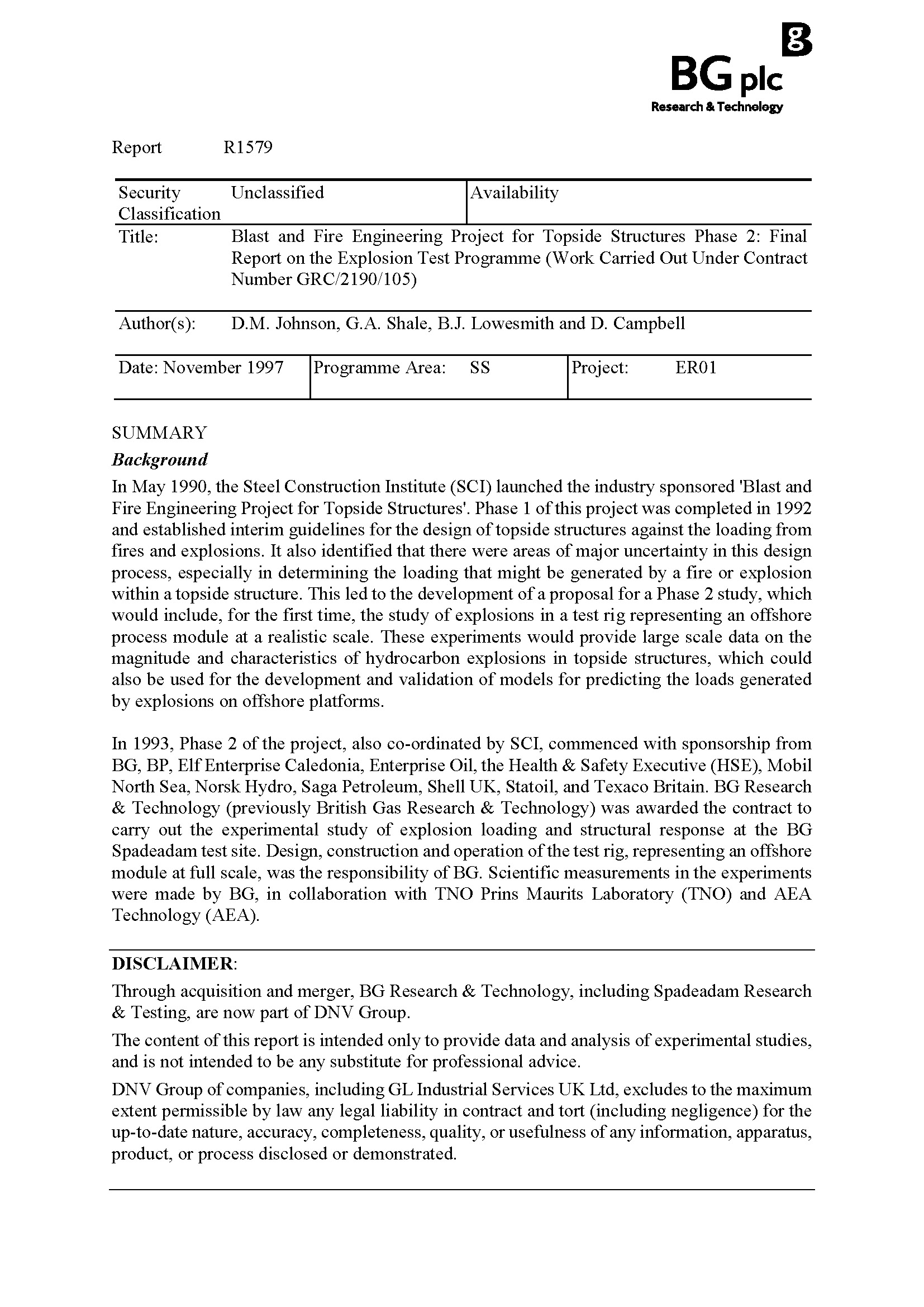 In May 1990, the Steel Construction Institute (SCI) launched the industry sponsored 'Blast and Fire Engineering Project for Topside Structures'. Phase 1 of this project was completed in 1992 and established interim guidelines for the design of topside structures against the loading from fires and explosions. It also identified that there were areas of major uncertainty in this design process, especially in determining the loading that might be generated by a fire or explosion within a topside structure. This led to the development of a proposal for a Phase 2 study, which would include, for the first time, the study of explosions in a test rig representing an offshore process module at a realistic scale. These experiments would provide large scale data on the magnitude and characteristics of hydrocarbon explosions in topside structures, which could also be used for the development and validation of models for predicting the loads generated by explosions on offshore platforms.

This is the Main Report of the Final Report on the Explosion Test Programme carried out as part of Phase 2 of the Blast and Fire Engineering Project for Topside Structures.

An explosion test rig was designed and built for the project. It was an all steel construction extending up to 28m long, 12m wide and 8m high, designed to represent at full scale, an offshore module. Within the rig, large and small steel obstacles were positioned to simulate typical process plant and pipework which would be found on an offshore installation. The design of the test rig structure was based on a strong, bolted framework with beams on 4m centres onto which panels could be fitted to provide the perimeter confinement conditions required in the test programme. A mezzanine deck, consisting of a steel support frame covered with serrated open bar grating, was located at mid-height throughout all of the test rig and was designed to be similar to those found in typical offshore modules. During each experiment the test rig was filled with a gas/air mixture and ignited by a single spark at a specified location.

The test programme comprised of a total of 27 experiments, 7 of which were additional to the Phase 2 project and were financed by the HSE. The experimental programme began in May 1995 and the first six experiments were conducted with the test rig 25.6m long, 8m wide and 8m high and containing only obstacles representative of the larger items of equipment that might be found on an offshore platform within the test rig, so called 'low obstacle density' tests. Following these tests, additional obstacles were installed in the test rig to provide a more realistic representation of a module on an offshore platform; the 'high obstacle density' configuration and a programme of 17 experiments was undertaken. The test rig was then modified, being lengthened to 28m and widened to 12m and 4 further experiments were performed. The change in obstacle density can be characterised by the volume blockage provided by the obstacles and the mean obstacle diameter. In the low obstacle density configuration, these parameters were 7.28% and 0.244m respectively. In the high-density experiments, the volume blockage was in the range of 8.48-9.58%, with the mean obstacle diameter being between 0.138m and 0.141m. The experiments were completed in March 1997.

The test programme was designed to include tests in which individual parameters were varied in order to study the effect on the resulting explosion overpressures. In addition to changing the obstacle density within the test rig and the size of the test rig, parameter changes included different wall perimeter confinement, the use of two kinds of water deluge system, fuel concentration and ignition location.

During all tests, information was obtained on the internal overpressures, external overpressures, flame arrival times, prevailing weather conditions and visual records. These items were considered to be the primary data on the explosion event. During some experiments, information on the net reaction load on obstacles within the test rig and the response of structures outside the test rig to an explosion loading was obtained. During one test a study of the response of a selection of special wall panels and various items of safety critical equipment was undertaken, as well as a study of the potential for missile generation.

Next
Back to Available Documents
Publisher: BG
Published in: 1997
Keywords:
BFETS Phase 2 / Final Report on the Explosion Test Programme