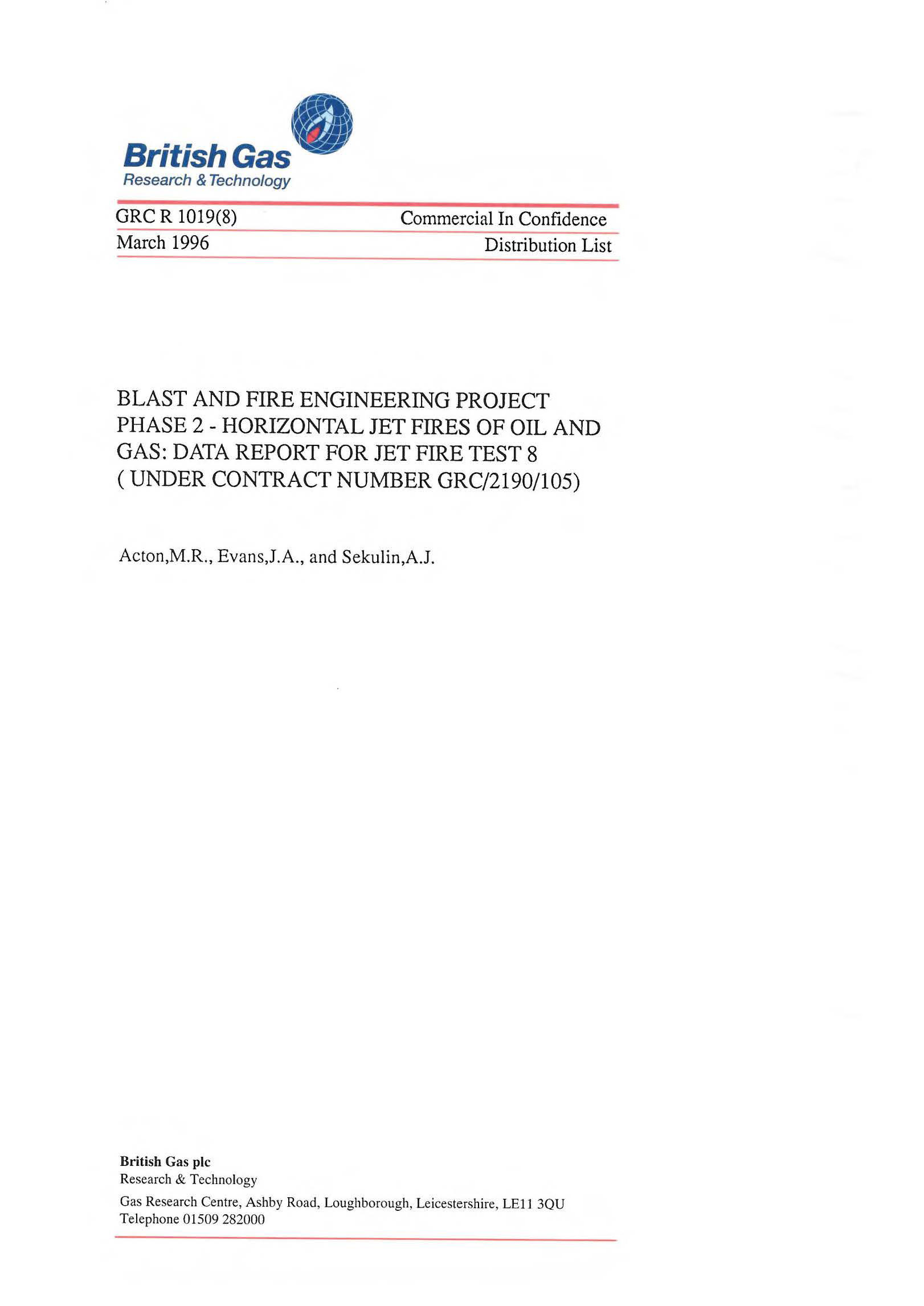 A programme of jet tire tests was undertaken by British Gas over a two-month period, between May and June 1995, under contract to the Steel Construction Institute as part of the industry sponsored ‘Blast and Fire Engineering Project for Topside Structures’. An overview report has been prepared which describes the measurement techniques and equipment used. The overview report also contains a summary of the data from each of the tests. In addition, an individual data report has been prepared for each test. This data report contains the detailed results of measurements taken during Test 8.

Test 8 was specified to be an impacting flame experiment, fuelled by 5 kg/s crude oil released horizontally from a circular hole at an absolute static pressure of 20 bar, and impacting normally on a horizontal 0.9 m diameter instrumented pipe target located such that its axis was a distance of 15 m from the release hole. Preferred weather conditions were dry, with a nominally co-flowing wind (i.e. blowing from behind the release, within 30° either side) and a horizontal wind speed in the range 3 to 8m/s.

In the test, a natural gas pilot was used to stabilise the crude oil flame close to the release point. The flame generated large quantities of thick, black smoke which partially obscured the tail of the flame. The visible flame extended approximately 28 m in a horizontal direction. There was no significant interaction between the flame and the ground, and no burning of liquid drop-out on the ground was observed during the test. Some liquid and soot deposits were observed on the surface of the pipe target following the test. The flame was luminous and radiative, with a time-averaged maximum flame surface emissive power of 316 kW/m2. The time-averaged total heat fluxes measured by instruments located on the surface of the pipe target and maintained at nominally 60°C were generally in excess of 100 kW/m2 for most of the instruments located in the engulfed region of the pipe target, and exceeded 200 kW/m2 at several locations. The time-averaged radiative heat fluxes measured at central locations on the front, top and back of the pipe target were approximately 60%, 94% and 100% of the total heat fluxes measured 0.05 m away.