Accounting for geometry effects for VCE loads on buildings 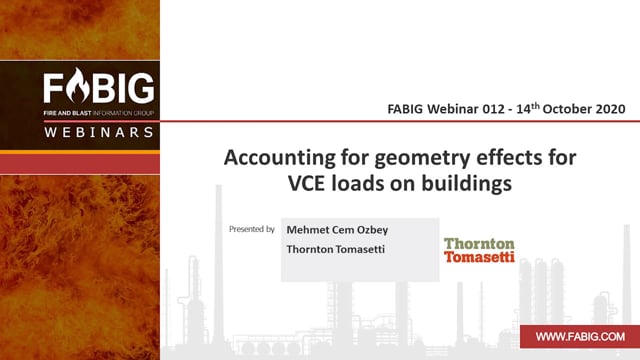 Vapour Cloud Explosions (VCEs) can cause significant damage to nearby buildings, facilities and infrastructure with potential loss of life and significant business interruption, so the accuracy of predicting blast loads on facility buildings is critical in estimating these losses. Closely spaced buildings and process equipment outside of the congested region of a VCE complicates the flow field for an expanding blast wave. Their presence can channel and shield the blast flow field, resulting in significant effects on the blast load magnitude and wave form shape. Currently, the most common way to estimate applied blast pressures resulting from VCEs is to use simplified methods that account for the total energy from the stoichiometric portion of the vapor cloud, fuel reactivity, and level of congestion and confinement, such as the TNO Multi-energy, equivalent TNT, CAM, and BST methods. These simplified tools can only be used for estimating blast loads on buildings based on unobstructed line-of-site conditions.

This presentation illustrates the use of a fast-running Computational Fluid Dynamic (CFD) approach that can account for channelling and shielding effects without having to use a turbulent combustion model. This approach provides a convenient tool for designers and process safety planners to more accurately quantify the hazard from postulated VCE hazards that include site specific channelling and shielding effects. The benefit of this computational approach is that blast loads on occupied buildings are typically over and under estimated based on traditional simplified line-of-site methods. The accuracy of the approach is demonstrated via comparisons of CFD simulations to experimentally measured waveforms. Computed pressure and impulse are also compared to the BST predictions for unobstructed and obstructed sites and their effect on the applied blast loads to buildings.

Next
Back to Online Lectures
Recorded in: October 2020
Keywords:
Fast-running CFD / Shielding and channeling effects / VCE Loads on Buildings