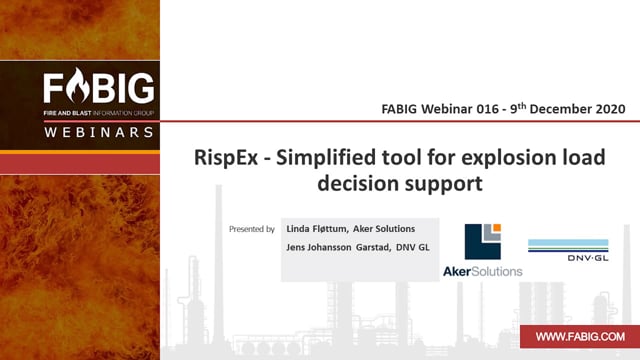 During the last decades, probabilistic explosion analysis has been the state-of-the-art method to specify design accidental explosion loads in oil and gas development projects on the Norwegian Continental Shelf (NCS). Numerous probabilistic explosion analyses have been performed for different installations during this period, and it should be possible to utilise this knowledge and experience without re-doing the analysis for each new development project.

In recent years, the industry has also been more aware of the challenges related to the use of the probabilistic explosion analysis to specify design accidental explosion loads. One main challenge is that design accidental loads normally need to be specified at an early stage in a development project. At this stage, the input (e.g. 3D-model and leak picture) is immature, and the results from a probabilistic explosion analysis are associated with significant uncertainties.

As a result of uncertain design loads, late design changes are often seen in development projects. Such changes may have a large impact on the project cost and schedule. It is also often seen that the explosion analyses performed in detail engineering do not really influence the design, since it is too late to change the design at this stage. Hence, much effort and money are spent on updating the explosion analysis several times in detail engineering phase without really influencing the design.

Based on the above, a need for a new method for explosion analysis in the early phases of a development project has been identified, and this has led to the development of RispEx. RispEx has been developed by DNV GL and Aker Solutions on behalf of the RISP Steering committee, led by Equinor.

This webinar considers the following: