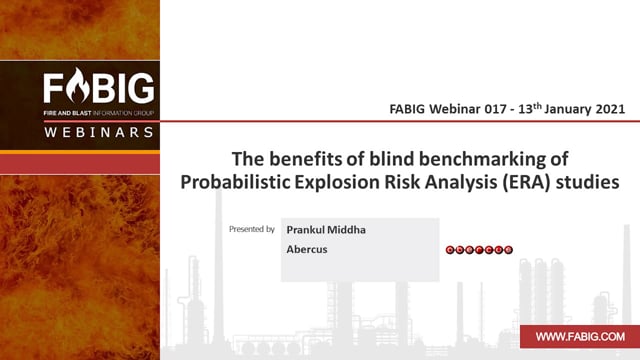 Since the late 1990’s, the offshore industry has progressively moved towards a probabilistic methodology based on the use of Computational Fluid Dynamics (CFD) to characterise the risks associated with the delayed ignition of accidental releases of flammable gases in both onshore and offshore facilities. The probabilistic methodology outlined in the NORSOK Standard Z-013 has emerged as the prevalent approach.

However, standards such as NORSOK Z-013 only provide a high-level outline of the probabilistic Explosion Risk Analysis (ERA) methodology. There is currently no industry guidance describing the probabilistic ERA methodology in a comprehensive and detailed manner. As a consequence, it should be recognized that there are inevitably variations in the approaches used by different parties on projects.

Furthermore, there can be significant uncertainties in the inputs to the probabilistic ERA, for instance the release frequency data assumed for the gas dispersion analysis, and the ignition probability model assumed for the explosion analysis. Other parameters such as the treatment of the release profile and the definition of the flammable gas cloud also play an important role. Several recent independent reviews of probabilistic studies have shown that, depending upon the assumptions made regarding these inputs, the design blast load may vary significantly.

Such a lack of consistency is a significant point of concern as it could lead to safety critical elements (for example, blast walls, decks and vessel supports) being either over or under-designed. This issue has been raised by various regulators including the UK HSE and Norwegian PSA. There are many different parties offering probabilistic ERA studies and as such, there is an urgent need to establish whether such work is carried out in a consistent manner across the industry.

This webinar reviews the various sources of uncertainty in probabilistic ERA, and outlines a proposed Joint Industry Project, the PROBABLAST JIP, that involves a blind probabilistic ERA inter-comparison exercise and aims to: