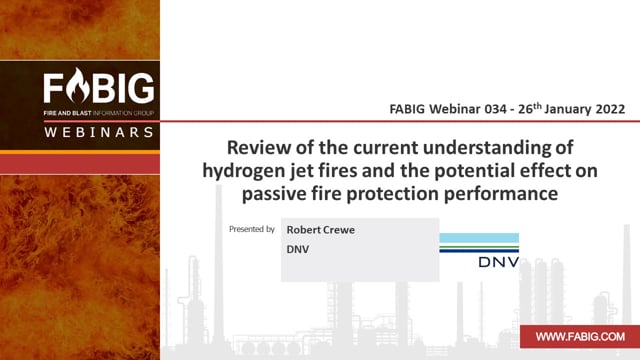 The energy transition, with a target of net-zero greenhouse gas emissions, will include a significant expansion in the use of hydrogen. Hydrogen may be used for energy transportation and storage, land and maritime propulsion, domestic heating and ‘hard to de-carbonise’ industry. In gaseous form, due to its low density, hydrogen tends to be stored at high-pressure, often measured in hundreds of bars.

If an accidental release of pressurised hydrogen occurs, a hydrogen jet fire might occur, and considering the projected scale of hydrogen infrastructure, there will undoubtedly be the need to protect critical structures and equipment using PFP. Although the response of PFP to hydrocarbon jet fires is well known and tested against, comparatively little is known about the response to hydrogen jet fires.

The presented review compares some similarities and differences of hydrocarbon and hydrogen jet fires. It was produced in the context of the authors’ principal interest being large-scale jet fires where PFP might be required.

A comparison of the high-pressure gaseous hydrogen releases and jet fires with natural gas and methane has been undertaken and shows that like-for-like, the external flame characteristics (flame length, thermal radiation) are not significantly different. If the release is transient (i.e. from an isolated inventory), a hydrogen jet fire will have a duration of about one third of a like-for-like methane/natural gas jet fire due to the higher volumetric outflow in the case of hydrogen. Internal flame characteristics show hydrogen jet fire flame temperatures are greater than those in methane/natural gas jet fires and suggests that the convective thermal flux to an object in the flame may be higher in the case of the hydrogen jet fire.

With respect to the possible effects on PFP materials, the hotter flame temperature and closer flame-stabilisation for a fully developed hydrogen jet fire has the potential to cause greater erosion of reactive PFP materials, in particular close to the point of impact. Further assessment of the flame temperature and convective and total heat flux within high pressure hydrogen flames would allow a better comparison with other hydrocarbons and provide better insight on the potential impact on PFP.