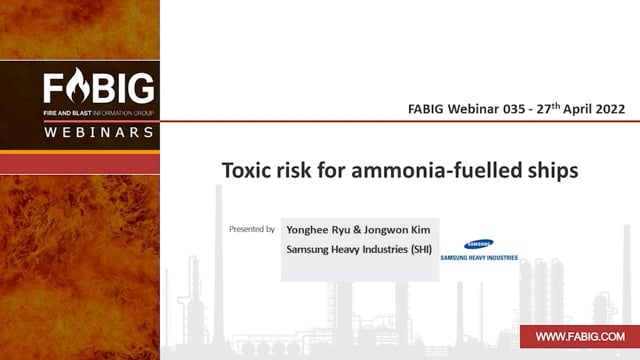 Fossil fuels such as oil and natural gas produce large amounts of carbon dioxide when burned. Carbon emissions trap heat in the atmosphere, causing climate change. In June 2021, International Maritime Organization (IMO) adopted key short-term measures aimed at cutting the carbon intensity of all ships by at least 40% by 2030. This means that the shipping industry needs new technologies, new fuels, and innovation to meet the greenhouse gases (GHG) targets.

In order to achieve the IMO’s target to reduce GHG emissions, a new design concept for ammonia-fuelled ships is under development. Ammonia as a fuel requires liquefied ammonia in the liquid state (boiling point: -33°C, vapor pressure @25°C: 10 bara), which is relatively stable and can be easily liquefied and stored in the same way as liquefied natural gas (LNG).

On the other hand, liquid ammonia requires about 1.4 to 2.0 times more tanks than LNG fuel tanks. In addition, exposure to high concentrations of ammonia in the air can immediately burn the eyes, nose, throat, and respiratory tract, leading to blindness, lung damage, or death.

On the night of April 6, 2021, ammonia gas leaked from a liquefied petroleum gas (LPG) tanker built in 1993 at Port Klang, Malaysia. One crew member was killed and three others were seriously injured in the accident. According to the Malaysian Maritime Administration (MMA), a preliminary investigation revealed that the ship's piping system was leaking, which exposed ammonia gas.

Dispersion analyses have been conducted for an ammonia-fuelled ship by varying leak and wind conditions. Various types of ammonia leakage scenarios have been examined to investigate the severity of ammonia leakage on board and then design implementation. In addition, the CFD analyses on ammonia gas dispersion from the vent mast and ventilation from the fuel preparation room have been carried out under emergency conditions. Based on the ammonia-ready container ship design, the toxic effect of ammonia gas on the main structure, accommodation, engine casing including cargo holds has been estimated.

From the results of a series of CFD analyses, it is found that an ammonia gas cloud of 30 ppm, which is a threshold value for design criterion, would be able to approach most of the areas on the whole ship structure so that additional measures would be needed to mitigate the toxic impact on the working personnel on the ship.

Safety design concepts are proposed to prevent and mitigate the risk of an accidental ammonia leak. The double-walled pipe system consists of an inner and an outer pipe. In the event of an abnormal gas leak, external piping can prevent ammonia leakage on board and send an alarm signal to the crew. It would also be more reliable when joint connections are enclosed and protected by a gas-tight enclosure.

Water curtain systems constitute a set of nozzles that are mounted radially to diffuse water at high pressure during an ammonia leak. The water curtains can scavenge ammonia gas, reduce the sustained time of ammonia gas dispersion, and mitigate toxic and hazardous gases.