The effects of simplification of the explosion pressure-time history 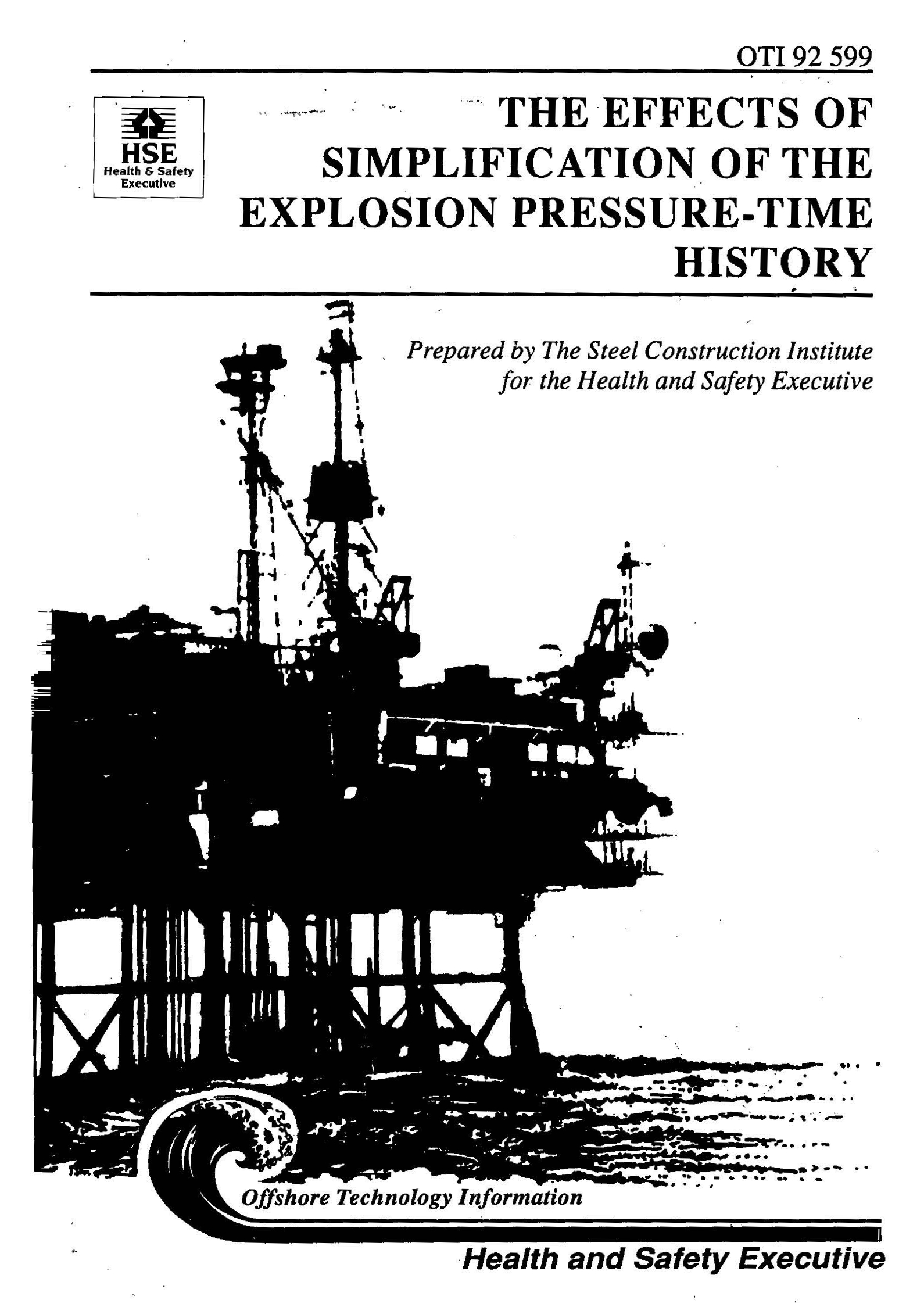 When analysing the response of a structure subjected to blast loading, for practical purposes it is essential to simplify both the structure and the loading. This report concentrates on the effects on response caused by idealisation of the blast load.

By studying some pressure-time histories recorded during gas/vapour cloud explosion blast tests, an insight into the kind of loads experienced was established. In comparison with loads generated by high explosives, they tended to have appreciable rise times and relatively long durations. The importance of these two blast load parameters was considered by studying the response of simple single degree-of-freedom structures to pulse loads.

Information has been collated on blast tests on structures where response has been recorded as well as blast pressures. Computer models of the structures were set up and idealised blast loads were applied. Various forms of idealisation were tried and the predicted responses were compared to the measured values. The FE code ABAQUS was used. As a result of these studies the following conclusions were drawn:

Studies of a limited number of large-scale structural components appear to indicate that response to a blast load, with an appreciable rise time, is usually in the dynamic to quasistatic regime and rarely in the impulsive. However, it is important to be aware of the differences in simplifying these two types of loads. Most impulsive loads can be represented as a sharp-fronted triangular pulse. Accurately representing the shape of the load and its peak overpressure and duration are not necessary; it is more important to model the impulse accurately. An exact representation of the spatial distribution of the blast load over the structure is almost impossible. Simplifications have to be made, thus introducing errors into the prediction of response.

Careful modelling of the rise time in simplified loading is very important when the duration of the load is close to the natural period of the structure. Preserving the peak overpressure is also important especially in the quasistatic regime since an increase/decrease in peak will result in a similar increase/decrease in response. Preserving the duration is critical when it is close to the natural period of the structure. When the duration is relatively long the loading is quasistatic, therefore accurately representing this quantity is not important if response is known to be purely elastic. However, if the response becomes plastic, buckling may occur and prolonged application of the load could cause collapse so in this case the load duration is a significant parameter. Careful modelling of material behaviour is also essential for good response predictions.

Areas of uncertainty in this subject include the derivation and idealisation of net loads on structures and the response of more complex and larger scale structures.

The full report is publicly available from the HSE Website at www.hse.gov.uk/research/otipdf/oti92599.pdf.